Last Tuesday we arrived home, groggy and out of it, after a two and a half week Thanksgiving visit with my family in Los Angeles.

It was a great trip, and our 23 month old proved to be a trooper during the entire trip. However a trip doesn’t start and end with the 12 hour flight. You’ve got the week and a half of jet lag on both ends to contend with.

While in California I, as always, was constantly bitching about how one has to drive everywhere. It felt incredibly stupid for us all to pile into the rental car to go to a Spielplatz in the mornings and afternoons.

I longed for the easy 5, 10 or, at the longest, 15 minute walks to one of the zillion playgrounds that are everywhere here in Munich.

What I forgot, though, is that it gets dark by 4:30 in the fall and winter. And it rains. The number one thing to do to get a jet lagged toddler (and an adult for that matter) back on track is to get a lot of activity and light during daylight hours.

Our girl was waking up from her mid-day nap at 4:00 p.m. Last year when we made the west coast trek, I would go to the Riem Arcaden shopping mall. She was just about a year old and there’s a small kids area. Plus light would filter in from the glass ceilings.

She’s now almost two and really active, and a crawl space wasn’t going to cut it this time. So I was once again faced with the eternal question:

What to do with a kid when it rains in Munich?

Then I remembered. Maybe that indoor playground by Isartor was finally open. The only indication that it had indeed opened was a comment left on their Facebook page. Their website had very little information.

I threw caution to the wind, bundled up my girl and hopped on the bus. Destination: Räuberhöhle. And Hallelujah! It was open, and had been for just a few days.

We were greeted by a nice gal who gave us two tokens and explained the basics: You could get more tokens downstairs, socks only please, there’s an area before the main play space to stow your stuff, including lockers with keys, and we could park our stroller right over there.

We headed to the ample stroller parking corner, so far so good. You could already hear  the rambunctious sounds of kids playing coming up the stairs and we were both eager to get down there.

Just as  promised, there were plenty of places to leave shoes and a ton of those Ikea shelves with boxes to drop your stuff in.

We hopped in our socks and ventured in. The place is HUGE. When my husband and I first started dating, a million years ago, we used to go here back when it was a video store.

I remember it being a huge, cavernous subterranean space. When the store finally closed and sat empty I feel like I once even thought ‘some enterprising person should turn that into an indoor play space’. What else can you do with a sprawling, windowless underground commercial space?

The playground starts at one end with a Fussball (or soccer, if you prefer) ‘field’ with two goals way at the other end is a baby play space, ‘Babyhöhle’ situated (a little oddly) across from a couple of air hockey tables.

In between there are two enormous play structures. One for kids aged four and above and one for smaller kids up to three years old. There’s a large bistro area with tables and chairs, a small Kuscheleck, three themed party rooms (Minions, Frozen and Pirates) a climbing wall and a large ball pit (each of the play structures also have ball pits). There is also even a bumper boat ring!

One thing that I couldn’t find was a private, quiet area for nursing. Something for the owners to think about.

This place is not for the Waldorf set. All of the structures and rides are all kind of mass-produced. There is a lot of noise, not just from kids but from the beeping but from all of the electronic games and kiddie rides that are placed throughout the space. 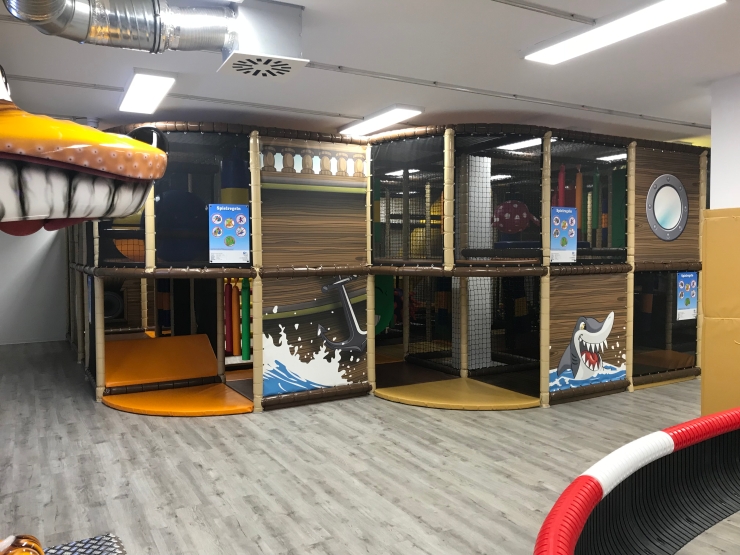 While sitting there watching my toddler joyfully clamber all over one of the play structures, it dawned on me: This place is Chuck E. Cheeses; commercial, charmless and totally, totally convenient.

This is not to say it isn’t well thought out, it is. There’s a changing room, child level sinks, it’s great if you have kids of multiple ages, an anti-bacterial hand spray dispenser at the entrance/exit (I usually eschew the stuff, but in this case it seems like a good idea). As I mentioned at the beginning, there is also ample room to park your stroller.

It just doesn’t have the wooden toy charm that you’d find at, say Kleine Sportgeister, but you also aren’t going find your self locked out when it gets too full, like I and few unlucky others did.

It’s also not cheap. One adult and one child cost €20, and adult with two kids cost €34 a family of five will pay €54. But. My guess is that the overhead on this place is probably really high. It’s an enormous retail space, conveniently located and easy to get to right in the heart of Munich.  I’m sure they also have to have all kinds of insurance.

So even though it’s not going to win any prizes for being a hipster-friendly, preciously curated space, and it’s on the pricey side I’ll take it. Needless to say kids don’t care about that stuff and mine loved it.I salute the massive investment in money and time it must have taken to get the space going. 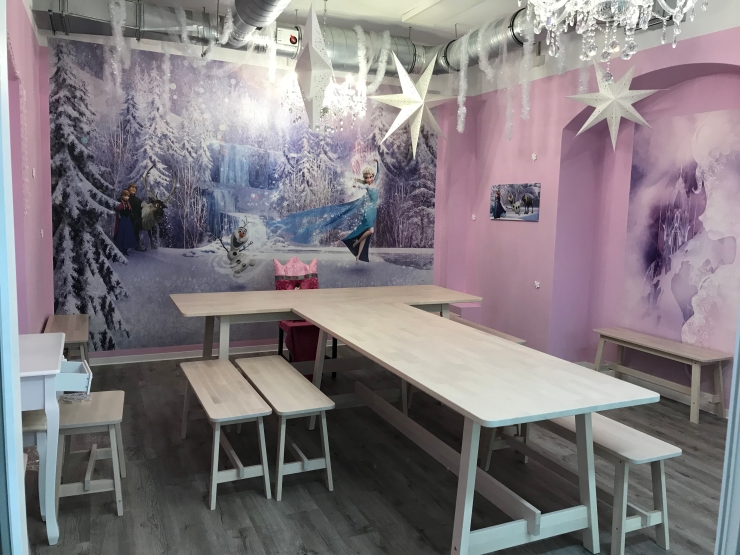 The space next to it that used to be the McDonalds is in the process of being turned into a Lidl and on the corner there’s a Chi Thu Vietnamese Street Food. So you can get some grocery shopping done, grab a Banh Mi to eat in the bistro area while you let your kid(s) burn off some steam. I’m not sure I’ll buy a 10er card, but I’m sure we’ll be back, much to my toddlers delight.