I’m sure you’ve heard or been following the news about the recent refugee influx to Germany.

We wanted to see it for ourselves so a couple of weekends ago we volunteered one evening at Hauptbahnhof.

Being at the train station as train load after train load of people arrived really reminded me how different experiencing something is rather than reading about it in the news.

All the trains coming from Salzburg or Budapest (or wherever) were arriving in the part of the train station where you usually catch the BOB. As people got off they were guided to a large room (I forget what it’s called, it’s the now defunct ticketing area) where they waited to get checked out or cared for in one of the medical tents. After that, they were then put on a bus and sent to one of the, well, camps where they’d stay until they were sent to another part of Germany (read about that process here).

We were assigned to the food station. As people disembarked (you could tell when a train arrived by all the applause) they passed by a clothing station where they could sift through donated clothes and shoes, and then on to our food station where we passed out sandwiches, fruit, cookies, hygiene supplies, coffee, tea, etc. 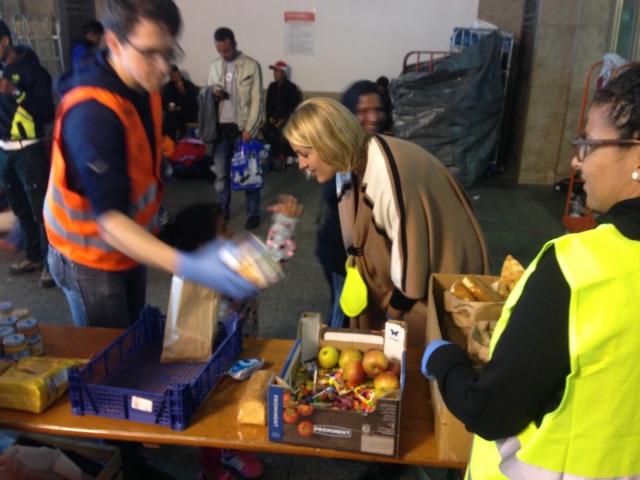 The effort was full of heart but a little chaotic. This tsunami of volunteering emerged completely spontaneously and as time goes on I think it’s getting a bit more coordinated. I’m too old and cranky to deal with that kind of disorganization (I was muttering something along the lines of ‘damn hippies’ by the end of our shift). So my plan is to wait to do more volunteering when the initial wave of euphoria passes, but there is still a shit ton more to do (with some established processes), and then help out.

An example: Donations were not coordinated, people were just coming to the train station and dropping off any and everything. Someone brought us a raw ear of corn and a kohlrabi (?!?!?). Four very small coffee canisters had been set up to provide coffee and tea as, literally, THOUSANDS of people disembarked (I think the weekend we volunteered around 12,000 people came in). It was nuts and we were constantly running out. Someone needed to put a phone call into Starbucks and ask them to donate those giant vats of coffee and tea (as well as offer them a great marketing opportunity to Germanys newest residents!)

All that aside, it’s been nothing short of amazing to see Germany and everyday people really rise to the occasion, and it felt good to be a part of that.

Mr. Wahlmünchnerin has continued to be involved. He was horrified and embarrassed by reports of Neo-Nazi arson attacks on newly built refugee shelters. I feel many Germans, aware of their nations dark past, have an irresistible urge to counter it any way they can when the opportunity arises. In fact, he’s volunteering today and has joined the Facebook group Nerds 4 Refugees who has built a website to coordinate donation and volunteering needs in real time.

One thought on “Refugees Welcome”