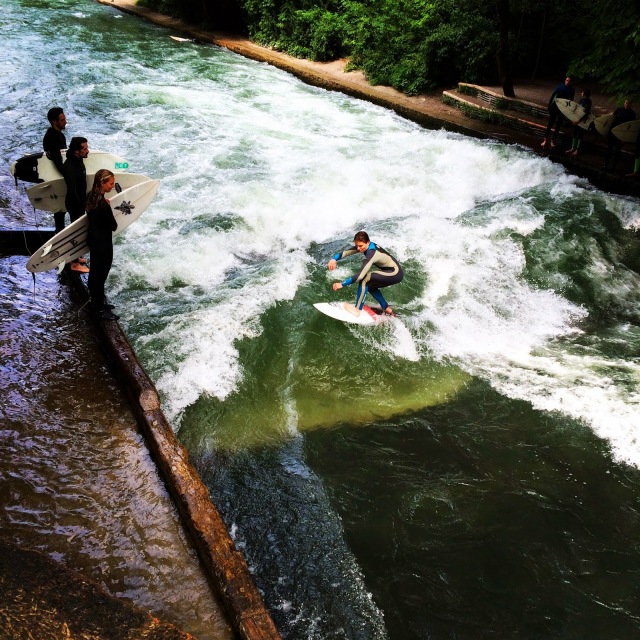 Every week I look at the ‘write Wahlmünchnerin post’ task on my calendar and think ‘What am I going to write about?’ And then I go for a walk.

I had to run an errand yesterday that took me down Prinzregentenstrasse past the surfing spot right before Haus der Kunst. In almost four (!) years of blogging about Minga how could I have neglected this place?!

I’ve noticed this scene becoming more and more of an iconic image representing Munich. It’s been in the New York Times, in Löwenbräu ads and was the opening sequence of a short Monocle film about why Munich regularly features in it’s top 10 in their annual report on the best cities in the world.

A few years ago, heavily encouraged by my husband, I went to see a film on river surfing (who knew?) Keep Surfing, which premiered in Munich. The film revealed the entire history of how this spot got started, and even featured our neighbor (!), Dieter ‘The Eater’, who is a regular there along with his daughters. Here’s a clip:

You’ll never catch me riding around like a nut on that wave, but no matter how many times I’ve seen it, I’m always compelled to stop and watch awhile whenever I pass by.