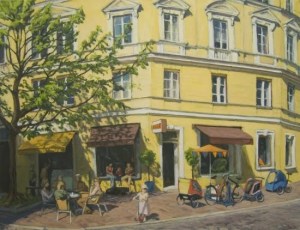 Last night I was introduced to two more things to love in Munich. The guest lecturer at my expat group was a fellow named Benjy Barnhart, an American who has lived in Munich for some time and works for Greencity.de, a local environmental group. The primary focus of the talk he gave was to tell us about all the things Green City does in Munich including organizing Munich’s Blade Night, Guerilla Gardening and tackling a lot of new-urbanism issues, which they refer to as ‘Green City Design’. Being a native of Los Angeles, I found it somewhat amusing as I’ve always considered Munich a poster-child green city: density, green space, world-class public transportation. But of course, there is always room for improvement! The organization does a lot of great things, and I’ll probably become a member (it’s just 25 Euro a year) or at least sign up for their newsletter.

The organization focuses a lot on mobility, and in Munich that means, of course, bikes. Towards the end of the talk, Benjy made a provocative segue into some of his personal work, stating that he finds bikes, and more specifically women on bikes sexy. He then proceeded to show us some of his personal paintings of women (and a few men) on bikes around Munich. I was immediately charmed, his work does such a fantastic job of capturing the feeling of Munich. I can’t say if someone who isn’t a Münchner would have such a full appreciation and be so moved by his work as a local, but I sure loved it. You can look at more of his work on his website here, many of paintings also capture some of the Green City activities that take place throughout the city. 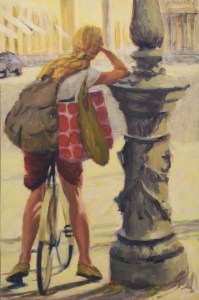 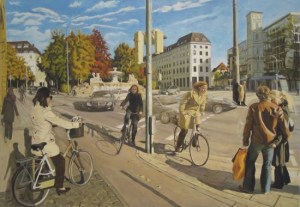 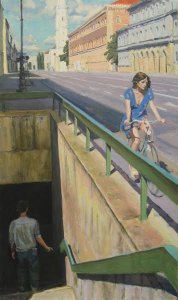